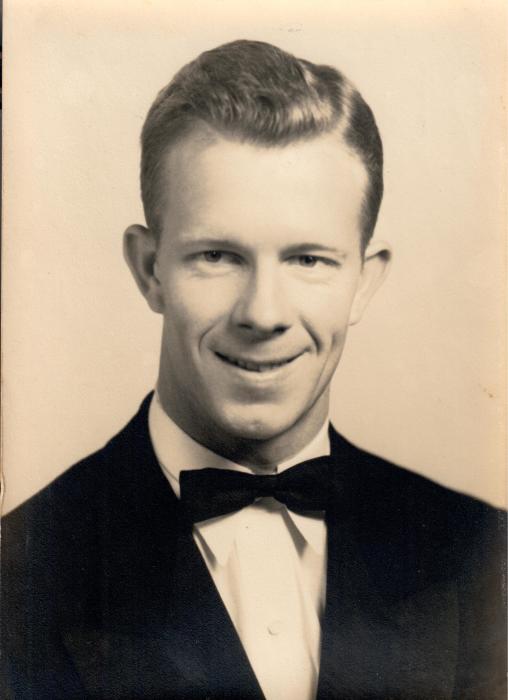 Bill Settle had an adventurous spirt and profound love for God and country that led him to enlist in the Navy at the age of 17 and serve aboard the submarine U.S. Corporal as a sonar technician during the later stages of World War II.  After serving three years and being honorably discharged he came home and enrolled at Wake Forest College where he met his future wife of 65 years, Bobbie.  After their marriage on May 26,1951, they moved to Bobbie’s hometown of Pulaski, VA, where his education continued at Virginia Polytechnic Institute (now Virginia Tech).  His studies at VPI led to his applying and acceptance into the College of Veterinary Medicine at the University of Georgia in Athens where he received his Doctor of Veterinary Medicine degree in 1957.

For the next two years, Dr. Bill Settle worked for the USDA in Aberdeen, NC and then up north outside Boston, MA before coming back home to North Carolina.  Dr. Bill and Bobbie brought along the spirit and tenaciousness of the Georgia Bulldog as they decided to begin a private veterinary practice in their home in Jonesboro before eventually opening Sanford Animal Hospital in 1960.

Dr. Bill epitomized the “country” veterinarian and loved living and serving in the Lee County.  One of his biggest disappointments was the disappearance of the family farms in the county and surrounding areas where he was able to not only care for the family milk cow, the working mules and horses, the plethora of dogs and cats, but interact with the family members themselves, sometimes receiving their farm produce as payments for his services.

His love for community was evidenced by his involvement with local service organizations.  He was a longtime member and Paul Harris Fellow of the Sanford Rotary Club and member of the Sanford Jaycees, Moose, and Elks clubs.  As one of the early members of the Lee County Wildlife club his picture is in the photograph still hanging on the clubhouse wall commemorating the ground breaking of the new clubhouse, shovel in hand.

His involvement with the North Carolina Veterinary Medical board, in an advisory capacity, helped initiate the current Veterinary Technician Program at Central Carolina Community College.

In 1980 he expanded Sanford Animal Hospital to include his daughter Dr. Katherine Settle and son-in-law, Dr. John Shontz.  After working for over 30 years as a practicing veterinarian, Dr. Bill retired to his home in Sanford to spend more time with family and friends.

His two favorite songs were “Take Her Down”, the theme song for the Navy’s submarine corps which reminded him of the honor of serving the United States of America and "Dixie"; not for any of the divisiveness it has come to imply, but because the lyrics and tune best exemplified his deep and loyal roots in the South.

But above all, he was a devoted family man, and he loved them all dearly. William Kemp Settle, DVM, will be missed.

In lieu of flowers, memorial contributions can be made to: The Retha Moffit Smith Scholarship/Loan Fund, at St. Luke Methodist Church, 2916 Wicker St, Sanford, NC 27330

To order memorial trees or send flowers to the family in memory of William Kemp Settle, please visit our flower store.