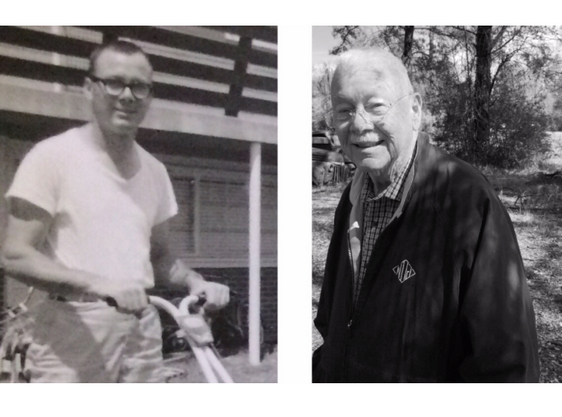 William J DesVergers died on July 2, 2020 after an extended decline since late 2019.  He was cared for in his home with the efforts of his 5 children, Hospice, and 3 dedicated caregivers.

William Jean DesVergers was born in Brooksville, Florida on July 17, 1926.  Bill led an extraordinarily rich life.  He was defined by a uniquely succinct sense of humor and his woodworking skills.  His retirement emphasis was on making and giving away bluebird houses & wooden trays.  Bill’s ability to build, fix, recycle, or readapt most anything combined the mind of an artist and an engineer without degrees in either.  He loved gardening, especially growing tomatoes traditionally and had mastered hydroponic gardening in his Whiteville greenhouse.  He was a pilot and amateur aerial photographer in his Cessna, “Victor”, until heart problems shut the door on flying.  Upon graduation from high school in 1944 he led his friends to volunteer for the Navy.  His eyesight denied him that choice and he was drafted into the US Army from his first semester of college at the U of Fla.  He served in the Phillipines and Occupied Japan.

Bill returned home to Tallahassee, FL and continued his college education there as Florida State College for Women became coed and renamed FSU to accommodate the returning WW II GI’s.   It was here that he met his wife of 64 years, Betty Sweet DesVergers, who predeceased him in 2013.  He was also predeceased by his parents Dunham Sanborn DesVergers and Clara Gibson DesVergers, a grandson Christopher Bambara, and daughter-in-law Christine O’Connor DesVergers.  In Tallahassee, Bill started his career of 52 years in the pine forestry industry, moving from Florida to North Carolina in 1954.

“Mr. Bill” was a loving husband, father, grandfather, great grandfather, and neighbor. He was a follower of Christ in thought, word and deed and a member of Whiteville UMC before moving to Sanford and joining St. Luke UMC.

In lieu of flowers, donations can be made to St. Luke UMC of Sanford, NC or Whiteville UMC.  A celebration of his life will be announced at a later date as circumstances allow.

To order memorial trees or send flowers to the family in memory of William J. DesVergers, please visit our flower store.