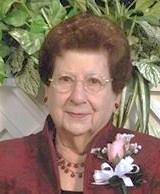 Alma Parker Farris passed away peacefully at the age of 102 on July 29, 2019, with her loving family by her side in Sanford’s Central Carolina Hospital. The second of Samuel and Helen Kelly Parker’s five children and the first of their four daughters, she was born on January 31st., 1917 in Rocky Mount (Edgecombe County), NC. The Parker Family relocated to Elizabethtown, NC in 1931 where Alma would graduate from Elizabethtown High School in 1934, study business at Sacred Heart College in Belmont, NC, later a part of Belmont Abbey College. Alma frequently marveled that her parents saw to it that she and three of her siblings attended college during the Great Depression and saw the youngest of their children to her college graduation in 1949. Following her studies at Sacred Heart, Alma returned to Elizabethtown and worked in her family’s businesses. On November 30, 1941, she and Shick Farris were the first couple to marry at Our Lady of the Snows Catholic Church,  They made their home, raised their three daughters, and became business owners in Elizabethtown, as well as business partners with Parker family members in Elizabethtown and at White Lake. Shick passed away on August 21st., 1964.

Alma, an accomplished business person in her own right, continued to own and operate Farris Department Store in Elizabethtown for the next fifty-three years. Her nephew, Charles Parker, partnered with her in that business during the 1970’s. Having an innate love for people, Alma often remarked that her customers were also her friends. Even following her retirement at the age of ninety, generations of them continued to send her heartfelt good wishes in their annual holiday and birthday greetings.                                              One of Alma’s most prized accomplishments was her role as a charter member of the American Business Women’s Association (ABWA) in Elizabethtown. She helped organize this Eastern North Carolina group of entrepreneurs  who created, funded, and awarded college scholarships to deserving young women in the region. Alma personified The Greatest Generation which always worked hard and with purpose, involved itself in civic interests, and contributed to the public good. Her support of the intellectual development of young women and to higher education in Bladen County remains exemplary.

Well into her nineties, Alma Farris continued to own her home in Elizabethtown where she often visited her community of friends which had always included members of various faith and cultural traditions. She truly “never met a stranger.”

Observing Alma’s descendants, one will see her sparkling brown eyes, quick wit, love of humor, determination to succeed, keen business instinct, talent for her satirical impersonations, optimism, generosity, pride in and loyalty to family and to all people and places to which she was bound,  and an unsurpassed empathy for those who suffer and/or are in any way in need. Certainly, an incomplete list of treasures which she bequeathed them.

In lieu of floral remembrances, the family requests that memorials be made to a charity of choice or to: The Alma Parker Farris Scholarship, Bladen Community College Foundation, P. O. Box 384, Dublin, North Carolina.  Memorials may also be made by going online to  www.bladencc.edu/bcc-foundation. Please note that the memorial is a scholarship and select the name.

To order memorial trees or send flowers to the family in memory of Alma Farris, please visit our flower store.

Our Lady of Snows Catholic Church